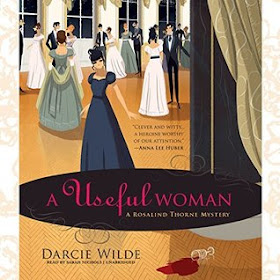 Rosalind Thorne was a privileged daughter of the aristocracy, and then her father defaulted on an enormous quantity of debt, and fled the country with Rosalind's older sister, Charlotte. Rosalind and her mother took refuge with Rosalind's godmother, Lady Blanchard. Rosalind's mother has since died. Her father reappeared, briefly, attempting to demand money from the Blanchards, and Rosalind had set up her own extremely modest household.

Since then she has been clinging to the edges of gentility, on the strength of her godmother's friendship (Lady Blanchard is one of the patronesses of Almack's), excellent manners, and her willingness to be useful when ladies of the ton need it. so when it becomes known Lady Blanchard is resigning from Almack's, in the same week that Jasper Ainsworth, son of a baronet, is found dead on the floor at Almack's, quite a few people want her to be useful. Also, of course, others who want her to stay out of it altogether.

What unfolds from here is a tangled tale, with Rosalind finding herself of interest again to Lord Castlemagne, with whom she'd been on the verge of betrothal when disaster struck her family, and also of interest to Adam Harkness, a principal investigator at Bow Street, or as they  are popularly known, a Bow Street Runner. Jasper's sister, Honoria, wants to know why her brother died. The Lady Patronesses just want the whole thing wiped away as quickly as possible.

This book seems a bit more influenced by Jane Austen than other popular Regency novels in its depiction of the Regency era, even though Austen mostly kept her storytelling in the country and this is almost entirely in London. The characters are lively and interesting, and the mystery takes some interesting twists.

I bought this audiobook.
Lis Carey at 12:30 AM
Share