Pale Realms of Shade (in The Book of Feasts & Seasons), by John C. Wright 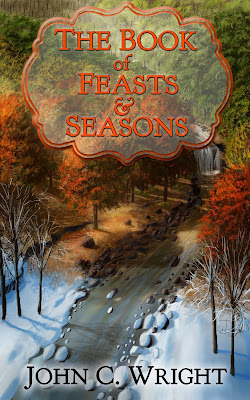 Another Puppy entry on the Hugo ballot.

The surprise twist here is that this one isn't bad.

A dead gumshoe finds himself pulled back to Earth for a conversation with his widow. She's having trouble collecting on his insurance policy because the company is arguing that he committed suicide. He didn't, but he's not all that interested in manifesting to the judge to say so.

Subsequent manifestations spill out more bits of the story of his death, plus his frustrations with the afterlife, and very soon to an encounter with real temptation. We learn that he got himself into this mess with decisions made not only along the course of his life, but at the very moment after death. He's now a poltergeist, and the tempting and only "easy" course is revenge on his partner.

Based on reading all the other Wright fiction nominees, I kept waiting for this to go bad places. It didn't. It's a solid story that, given it is explicitly religious fiction, expresses beliefs and values that have a strong and positive resonance for me. It won't work for other people for the very reasons it does work for me, and it's not so good that it blows me away, but this is the first of the Puppy nominees whose placement on my ballot I will have to think seriously about.